Lawsuit Against NASA Based On Opportunity Rover Raw B&W Images

Some scientists not connected to the mission "smell a rat, as they say"

- A neuropsychologist and author identifying himself as “Rhawn Joseph, Ph.D. pro se” (representing himself) filed a lawsuit against NASA on January 27, 2014, in the U. S. District Court Northern District of California “for a writ of mandamus compelling NASA to perform a duty to thoroughly scientifically examine and investigate a putative biological organism on Mars identified/discovered by petitioner and referred to by NASA as: 'Unlike Anything We Have Seen Before.'”

Rhawn Joseph argues that he “immediately recognized a mushroom-like fungus (Apothecium), a composite organism consisting of colonies of lichen and cyanobacteria.” Joseph wants NASA to photograph the object more closely and correct the identification. On Earth, Apothecium is a disk-shaped or cup-shaped ascocarp of some lichens and the fungi Ascomycetes.

Above is Sol 3528 Before and Sol 3540 After images of the same patch of ground in front of NASA's Mars Exploration Rover Opportunity 13 days apart that documents the arrival of a bright rock onto the scene. The rover had completed a short drive just before taking the second image, and one of its wheels likely knocked the rock -- dubbed "Pinnacle Island" -- to this position. The rock is about the size of a doughnut.


Nickle and dimers who wants a change Feb 8-10th storm? 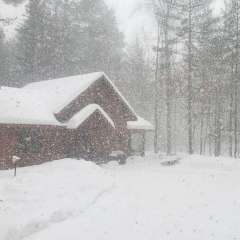 Looks like another round of 1 to maybe 3" over the area.


Portal by DevFuse · Based on IP.Board Portal by IPS
×
×